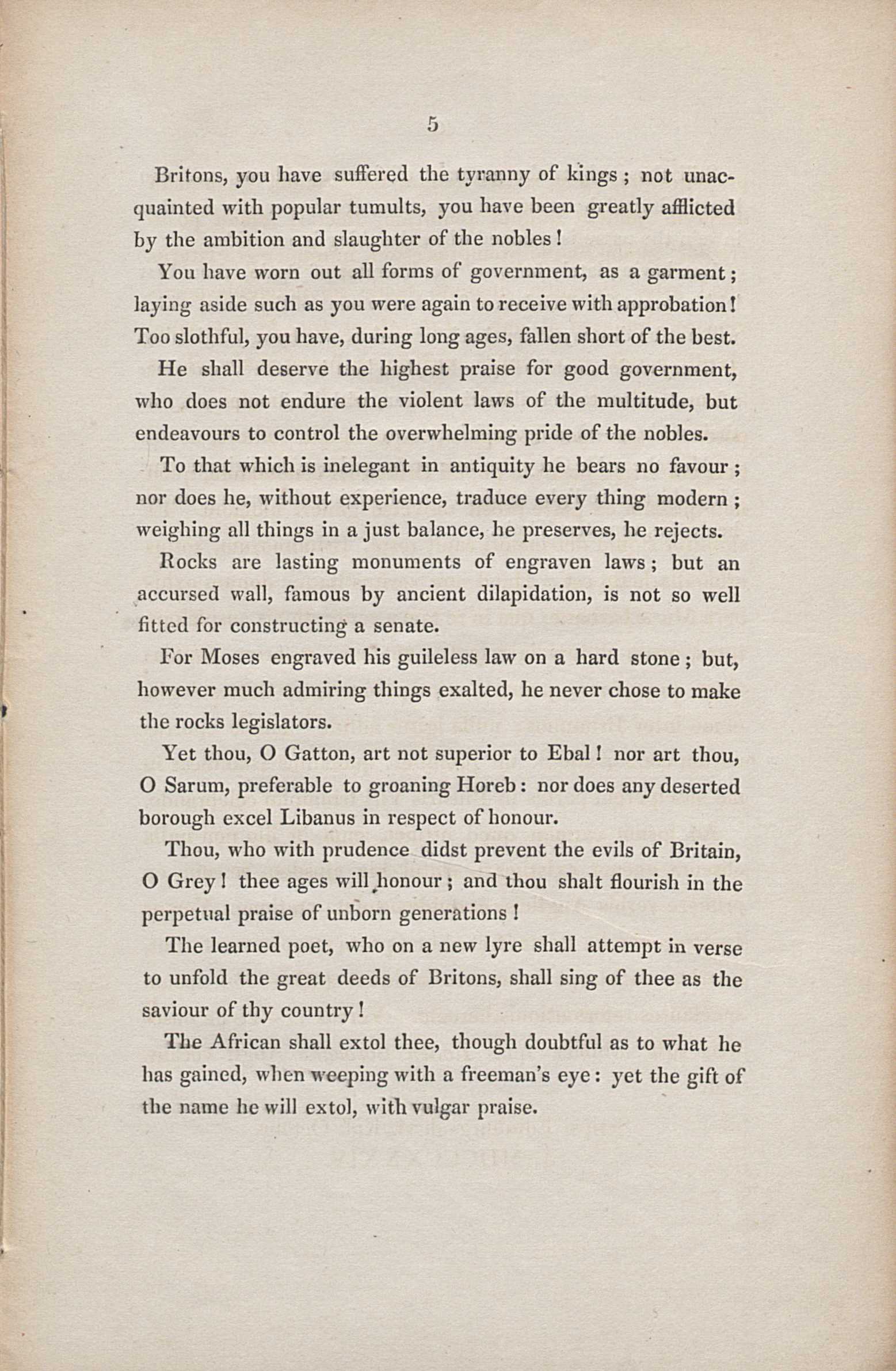 ﻿Britons, you have suffered the tyranny of kings ; not unac- quainted with popular tumults, you have been greatly afflicted by the ambition and slaughter of the nobles 1 You have worn out all forms of government, as a garment; laying aside such as you were again to receive with approbation! Too slothful, you have, during long ages, fallen short of the best. He shall deserve the highest praise for good government, who does not endure the violent laws of the multitude, but endeavours to control the overwhelming pride of the nobles. To that which is inelegant in antiquity he bears no favour ; nor does he, without experience, traduce every thing modern ; weighing all things in a just balance, he preserves, he rejects. Rocks are lasting monuments of engraven laws; but an accursed wall, famous by ancient dilapidation, is not so well fitted for constructing a senate. For Moses engraved his guileless law on a hard stone ; but, however much admiring things exalted, he never chose to make the rocks legislators. Yet thou, O Gatton, art not superior to Ebal! nor art thou, O Sarum, preferable to groaning Horeb: nor does any deserted borough excel Libanus in respect of honour. Thou, who with prudence didst prevent the evils of Britain, O Grey I thee ages will honour; and thou shalt flourish in the perpetual praise of unborn generations ! The learned poet, who on a new lyre shall attempt in verse to unfold the great deeds of Britons, shall sing of thee as the saviour of tby country ! The African shall extol thee, though doubtful as to what he has gained, when weeping with a freeman’s eye: yet the gift of the name he will extol, with vulgar praise.
(1) Band
(2) Band
(3) Saurblað
(4) Saurblað
(5) Blaðsíða 1
(6) Blaðsíða 2
(7) Blaðsíða 3
(8) Blaðsíða 4
(9) Blaðsíða 5
(10) Blaðsíða 6
(11) Blaðsíða 7
(12) Blaðsíða 8
(13) Saurblað
(14) Saurblað
(15) Band
(16) Band
(17) Kjölur
(18) Framsnið
(19) Kvarði
(20) Litaspjald