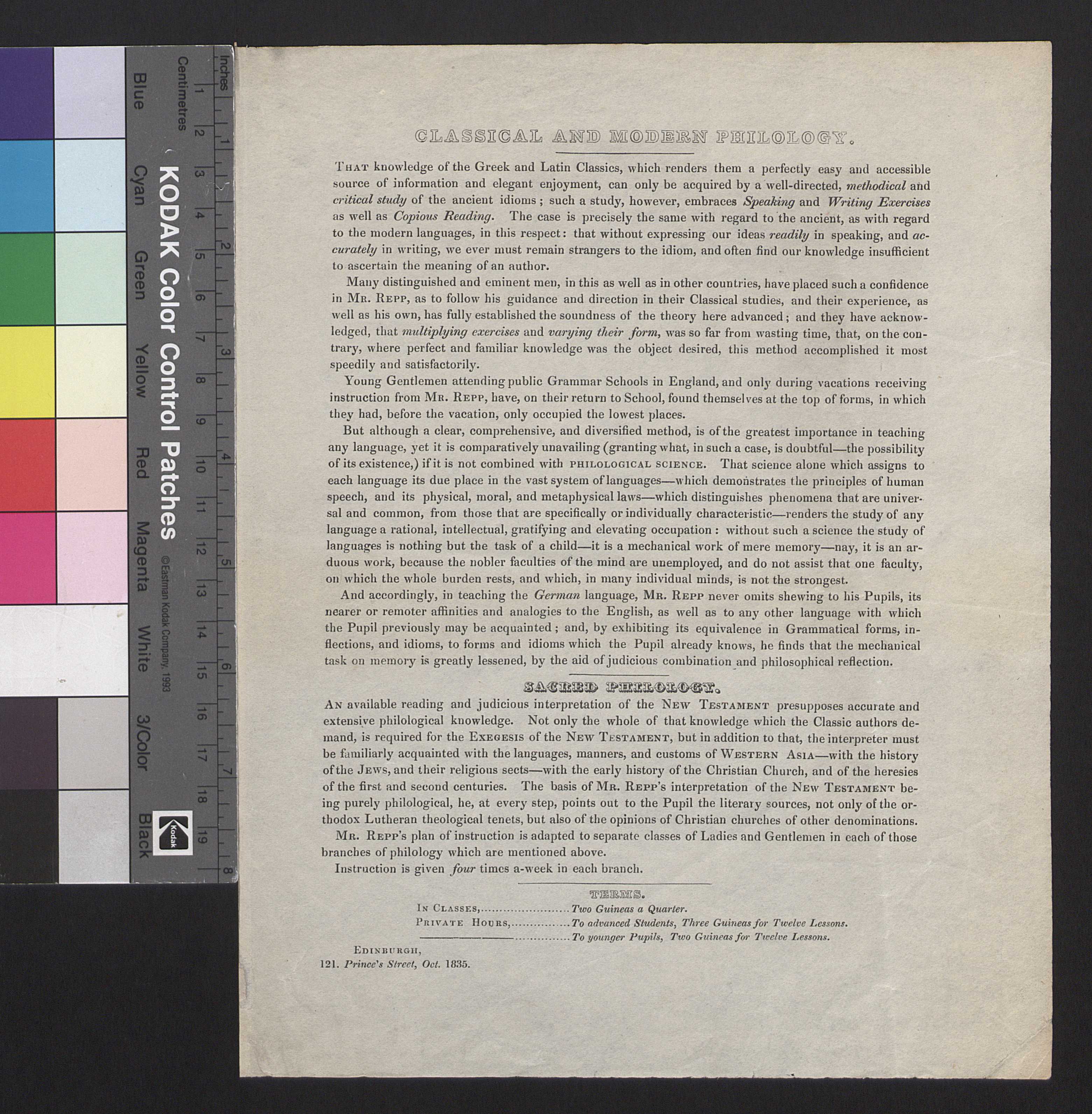 ﻿KODAK Color Control Patches ©JLASSJKSAII* Ml 2M©®H®£f IPM21L©)L@©T That knowledge of the Greek and Latin Classics, which renders them a perfectly easy and accessible source of information and elegant enjoyment, can only be acquired by a well-directed, methodical and critical study of the ancient idioms ; such a study, however, embraces Speaking and Writing Exercises as well as Copious Reading. The case is precisely the same with regard to the ancient, as with regard to the modern languages, in this respect: that without expressing our ideas readily in speaking, and ac- curately in writing, we ever must remain strangers to the idiom, and often find our knowledge insufficient to ascertain the meaning of an author. Many distinguished and eminent men, in this as well as in other countries, have placed such a confidence in Mr. Repp, as to follow his guidance and direction in their Classical studies, and their experience, as well as his own, has fully established the soundness of the theory here advanced ; and they have acknow- ledged, that multiplying exercises and varying their form, was so far from wasting time, that, on the con- trary, where perfect and familiar knowledge was the object desired, this method accomplished it most speedily and satisfactorily. Young Gentlemen attending public Grammar Schools in England, and onty during vacations receiving instruction from Mr. Repp, have, on their return to School, found themselves at the top of forms, in which they had, before the vacation, only occupied the lowest places. But although a clear, comprehensive, and diversified method, is of the greatest importance in teaching any language, yet it is comparatively unavailing (granting what, in such a case, is doubtful—the possibility of its existence,) if it is not combined with philological science. That science alone which assigns to each language its due place in the vast system of languages—which demonstrates the principles of human speech, and its physical, moral, and metaphysical laws—which distinguishes phenomena that are univer- sal and common, from those that are specifically or individually characteristic—renders the study of any language a rational, intellectual, gratifying and elevating occupation : without such a science the study of languages is nothing but the task of a child—it is a mechanical work of mere memory—nay, it is an ar- duous work, because the nobler faculties of the mind are unemployed, and do not assist that one faculty, on which the whole burden rests, and which, in many individual minds, is not the strongest. And accordingly, in teaching the German language, Mr. Repp never omits shewing to his Pupils, its nearer or remoter affinities and analogies to the English, as well as to any other language with which the Pupil previously may be acquainted ; and, by exhibiting its equivalence in Grammatical forms, in- flections, and idioms, to forms and idioms which the Pupil already knows, he finds that the mechanical task on memory is greatly lessened, by the aid of judicious combination and philosophical reflection. An available reading and judicious interpretation of the New Testament presupposes accurate and extensive philological knowledge. Not only the whole of that knowledge which the Classic authors de- mand, is required for the Exegesis of the New Testament, but in addition to that, the interpreter must be familiarly acquainted with the languages, manners, and customs of Western Asia—with the history of the Jeivs, and their religious sects—with the early history of the Christian Church, and of the heresies of the first and second centuries. The basis of Mr. Repp’s interpretation of the New Testament be- ing purely philological, he, at every step, points out to the Pupil the literary sources, not only of the or- thodox Lutheran theological tenets, but also of the opinions of Christian churches of other denominations. Mr. Repp’s plan of instruction is adapted to separate classes of Ladies and Gentlemen in each of those branches of philology which are mentioned above. Instruction is given four times a-week in each branch. In Classes,.... Private Hours, Edinburgh, 121. Prince's Street, Oct. 1R35. Two Guineas a Quarter. To advanced Students, Three Guineas for Twelve Lessons. To younger Pupils, Two Guineas for Twelve Lessons.
(1) Blaðsíða [1]
(2) Blaðsíða [2]
(3) Kvarði
(4) Litaspjald